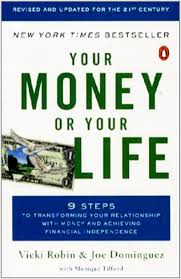 In an age of great economic uncertainty when everyone is concerned about money and how they spend what they have, this new edition of the bestselling Your Money or Your Life is an essential read. With updated resources, an easy-to-use index, and anecdotes and examples particularly relevant today-it tells you how to:

>> get out of debt and develop savings

>> save the planet while saving money

In Your Money or Your Life, Vicki Robin shows readers how to gain control of their money and finally begin to make a life, rather than just make a living.

Vicki Robin is a prolific social innovator, writer and speaker. She is coauthor with Joe Dominguez of the international best-seller, Your Money or Your Life: Transforming Your Relationship With Money and Achieving Financial Independence (Viking Penguin, 1992, 1998, 2008). It was an instant NY Times best seller in 1992 and steadily appeared on the Business Week Best Seller list from 1992-1997. It is available now in eleven languages.

Called by the New York Times as the “prophet of consumption downsizers,” Vicki has lectured widely and appeared on hundreds of radio and television shows, including “The Oprah Winfrey Show,” “Good Morning America” and National Public Radio’s “Weekend Edition” and “Morning Edition”; she has also been featured in well over 100 magazines including People Magazine, AARP, The Wall Street Journal, Woman’s Day, Newsweek, Utne Magazine and the New York Times.

Vicki has helped launch many sustainability initiatives including: The New Road Map Foundation, The Simplicity Forum, The Turning Tide Coalition, Sustainable Seattle, The Center for a New American Dream, Transition Whidbey and more. In the 1990’s she served on the President’s Council on Sustainable Development’s Task Force on Population and Consumption.

Money & Faith:  The Search for Enough by Michael Schut

Your Money or Your Life: 9 Steps to Transforming Your Relationship with Money and Achieving Financial Independence by Vicki Robin, Joe Dominguez, & Monique Tilford

Note:  These two texts will be provided as a part of your registration to this seminar; you do not need to purchase them separately.

Spending Planning
You Need A Budget